How Your Brain Works!

The National Brain Health Center for African Americans wishes to thank the authors; How Stuff Works.Com for all of the content of this publication. 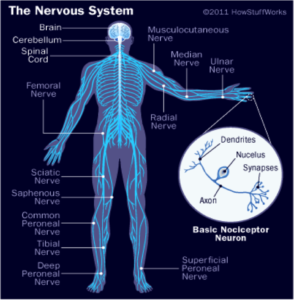 Every animal you can think of — mammals, birds, reptiles, fish, amphibians — has a brain. But the human brain is unique. Although it’s not the largest, it gives us the power to speak, imagine and problem solve. It is truly an amazing organ.

The brain performs an incredible number of tasks including the following:

All of these tasks are coordinated, controlled and regulated by an organ that is about the size of a small head of cauliflower.

Your brain, spinal cord and peripheral nerves make up a complex, integrated information-processing and control system known as your central nervous system. In tandem, they regulate all the conscious and unconscious facets of your life. The scientific study of the brain and nervous system is called neuroscience or neurobiology. Because the field of neuroscience is so vast — and the brain and nervous system are so complex — this article will start with the basics and give you an overview of this complicated organ.

We’ll examine the structures of the brain and how each section controls our daily functions, including motor control, visual processing, auditory processing, sensation, learning, memory and emotions.

The basic design of a neuron 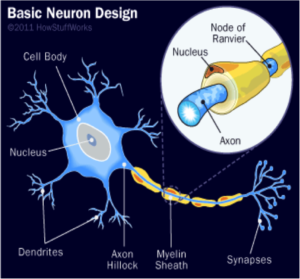 Your brain is made of approximately 100 billion nerve cells, called neurons. Neurons have the amazing ability to gather and transmit electrochemical signals — think of them like the gates and wires in a computer.

Neurons share the same characteristics and have the same makeup as other cells, but the electrochemical aspect lets them transmit signals over long distances (up to several feet or a few meters) and send messages to each other.

Neurons come in many sizes. For example, a single sensory neuron from your fingertip has an axon that extends the length of your arm, while neurons within the brain may extend only a few millimeters.

They also have different shapes depending on their functions. Motor neurons that control muscle contractions have a cell body on one end, a long axon in the middle and dendrites on the other end. Sensory neurons have dendrites on both ends, connected by a long axon with a cell body in the middle. Interneurons, or associative neurons, carry information between motor and sensory neurons.

These fundamental members of the nervous system also vary with respect to their functions.

The simplest type of neural pathway is a monosynaptic (single connection) reflex pathway, like the knee-jerk reflex. When the doctor taps the right spot on your knee with a rubber hammer, receptors send a signal into the spinal cord through a sensory neuron. The sensory neuron passes the message to a motor neuron that controls your leg muscles. Nerve impulses travel down the motor neuron and stimulate the appropriate leg muscle to contract. The response is a muscular jerk that happens quickly and does not involve your brain. Humans have lots of hardwired reflexes like this, but as tasks become more complex, the pathway circuitry gets more complicated and the brain gets involved.

As you proceed up the evolutionary ladder from fish toward humans, check out the changes in the brain. For example, the cerebrum gets bigger, takes up a larger part of the total brain and becomes folded. 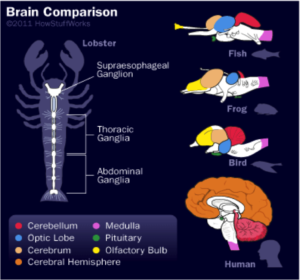 The simplest possible creatures have incredibly basic nervous systems made up of nothing but reflex pathways. For example, flatworms and invertebrates don’t have centralized brains. They have loose associations of neurons arranged in straightforward reflex pathways. Flatworms have neural nets, or individual neurons linked together that form a net around the entire animal.

Most invertebrates (such as the lobster) have modest “brains” that consist of localized collections of neuronal cell bodies called ganglia. Each ganglion controls sensory and motor functions in its segment through reflex pathways, and the ganglia are linked together to form a simple nervous system. As nervous systems evolved, chains of ganglia evolved into more centralized simple brains.

Brains evolved from ganglia of invertebrates. Regardless of the animal, brains have the following parts:

Here we’re looking at the underside of the brain, showing the brain stem and cranial nerves. 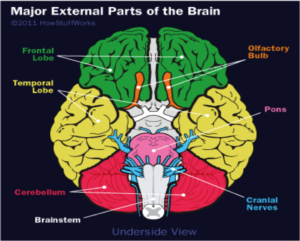 Lower animals, such as fish, amphibians, reptiles and birds, don’t do much “thinking,” but instead concern themselves with the everyday business of gathering food, eating, drinking, sleeping, reproducing and defending themselves.

These are instinctual processes [source: National Geographic]. Therefore, their brains are organized along the major centers that control these functions.

We humans perform these functions as well, and so have a “reptilian” brain built into us. That means we have the same parts of the brain found in reptiles, namely the brain stem and the cerebellum.

Ready to learn about the lower brain? We’ll discuss that on the next page.

A peek at the lower brain 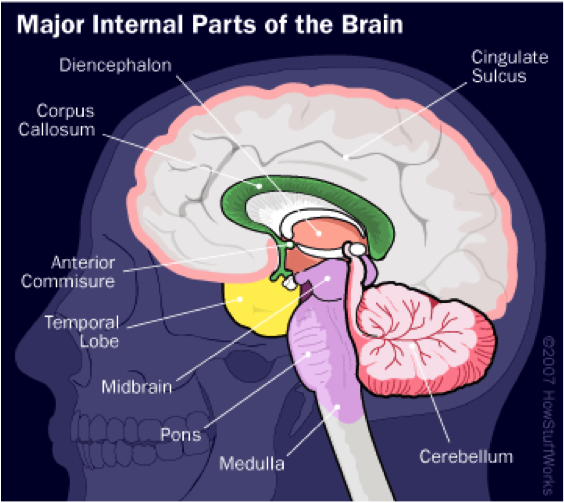 The basic lower brain consists of the spinal cord, brain stem and diencephalon (the cerebellum and cortex are also present, but will be discussed in later sections). In turn, the brain stem comprises the medulla, pons, midbrain, hypothalamus and thalamus [source: Health Pages].

Within each of these structures are centers of neuronal cell bodies, called nuclei, which are specialized for particular functions (breathing, heart-rate regulation, sleep):

The cerebellum, also known as the “little brain” because it’s folded into many lobes, lies above and behind the pons. As the second biggest area of the brain, it receives sensory input from the spinal cord, motor input from the cortex and basal ganglia, and position information from the vestibular system.

The “little brain” then integrates this information and influences outgoing motor pathways from the brain to coordinate movements. To demonstrate this, reach out and touch a point in front of you, such as the computer monitor — your hand makes one smooth motion. If your cerebellum were damaged, that same motion would be very jerky, as your cortex initiated a series of small muscle contractions to home in on the target point. The cerebellum may also be involved in language (fine muscle contractions of the lips and larynx), as well as other cognitive functions.

External parts of the human brain 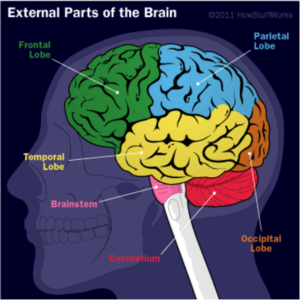 The cerebrum is the largest part of the human brain. It contains all of the centers that receive and interpret sensory information, initiate movement, analyze information, reason and experience emotions. The centers for these tasks are located in different parts of the cerebral cortex, which is the outside layer of the cerebellum and is comprised of gray matter. The inside is made up of white matter.

Major Parts of the Cerebral Cortex

The cortex dominates the exterior surface of the brain. The surface area of the brain is about 233 to 465 square inches (1,500 to 2,000 cm2), which is about the size of one to two pages of a newspaper. To fit this surface area within the skull, the cortex is folded, forming folds (gyri) and grooves (sulci). Several large sulci divide the cerebral cortex into various lobes: the frontal lobe, parietal lobe, occipital lobe and temporal lobe. Each lobe has a different function.

Get to know the interior of your brain a bit better.

When viewed from above, a large groove (interhemispheric fissure) separates the brain into left and right halves. The halves talk to each other through a tract of white-matter fibers called the corpus callosum. Also, the right and left temporal lobes communicate through another tract of fibers near the rear of the brain called the anterior commissure.

If you look at a cutaway view of the brain, you see that the cortical area above the corpus callosum is divided by a groove. This groove is called the cingulate sulcus. The area between that groove and the corpus callosum is called the cingulate gyrus, also referred to as the limbic system or limbic lobe. Deep within the cerebrum are the basal ganglia, amygdala and hippocampus.

This ends our tour of the major structures of the cortex. Now, let’s see what those structures do.

Sure, this homunculus looks rather strange, but that’s because the representation of each area is related to the number of sensory neuronal connections, not its physical size. 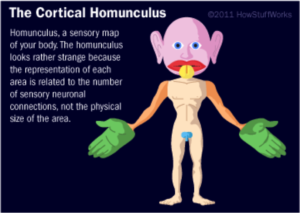 Several areas of the cerebral cortex have specialized functions:

Parietal lobe — The parietal lobe receives and processes all somatosensory input from the body (touch, pain).

Frontal lobe — The frontal lobe is involved in motor skills (including speech) and cognitive functions.

Occipital lobe — The occipital lobe receives and processes visual information directly from the eyes and relates this information to the parietal lobe (Wernicke’s area) and motor cortex (frontal lobe). One of the things it must do is interpret the upside-down images of the world that are projected onto the retina by the lens of the eye.

Temporal lobe — The temporal lobe processes auditory information from the ears and relates it to Wernicke’s area of the parietal lobe and the motor cortex of the frontal lobe.

Water on the Brain 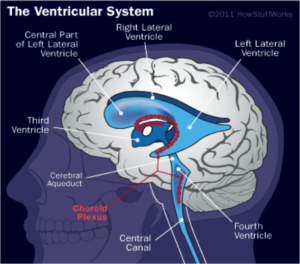 Your brain and spinal cord are covered by a series of tough membranes called meninges, which protect these organs from rubbing against the bones of the skull and spine.

For further protection, the brain and spinal cord “float” in a sea of cerebrospinal fluid within the skull and spine. This cushioning fluid is produced by the choroid plexus tissue, which is located within the brain, and flows through a series of cavities (ventricles) out of the brain and down along the spinal cord. The cerebrospinal fluid is kept separate from the blood supply by the blood-brain barrier.

As you can see, your brain is a complex, highly organized organ that governs everything you do. Now that you are familiar with the anatomy of the brain, keep reading for more articles on how it works.