So what is Epilepsy? 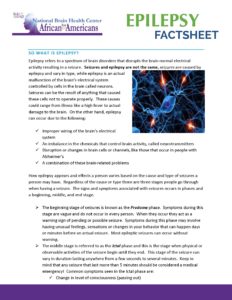 Epilepsy refers to a spectrum of brain disorders that disrupts the brain normal electrical activity resulting in a seizure. Seizures and epilepsy are not the same, seizures are caused by epilepsy and vary in type, while epilepsy is an actual malfunction of the brain’s electrical system controlled by cells in the brain called neurons.   Seizures can be the result of anything that caused these cells not to operate properly. These causes could range from illness like a high fever to actual damage to the brain. On the other hand, epilepsy can occur due to the following:

How epilepsy appears and effects a person varies based on the cause and type of seizures a person may have.   Regardless of the cause or type there are three stages people go through when having a seizure.   The signs and symptoms associated with seizures occurs in phases and a beginning, middle, and end stage.

Epilepsy is very common among African-Americans

Current statistics estimate that 1 in 26 people will develop epilepsy during their lifetime resulting in nearly 2 million people living with this debilitating brain disorder.   African-Americans account for nearly one-third of all who have been diagnosed as having epilepsy and more than half of them actively having seizures. This means that these individuals have at least one seizure in the past year and are taking medications to help control them. This poses a challenge for the African-American community as epilepsy significantly impacts a person’s ability to perform daily activities, to work, to get an education, and to take care of their families.

Can You Prevent Epilepsy?

The short answer is no since epilepsy occurs suddenly there are no ways to prevent it from happening. For those that are living with epilepsy there are things you can do help prevent or decrease the frequency of the seizures caused by epilepsy like making sure the follow your doctor’s treatment plan, taking your medications on time and as prescribed, and avoid things that might trigger a seizure. There is no cure for epilepsy but with proper medications, medical devices, and a healthy lifestyle most people with epilepsy can live a normal and productive life.

It is also important to know and understand the Do’s and Don’ts for dealing with epilepsy and seizures.

DO’s – protect the person from hurting themselves and those around them, help with breathing if they are unable to, stay with them until they have recovered or medical help arrives, and support them by letting them know they had a seizure if they can’t remember.

Don’ts – restrain a person having a seizure, put anything in their mouth, or be judgmental.

How is epilepsy treated?

Epilepsy can be treated by either medications, implanted devices, diet, surgery or a combination of these therapies. Most people are able to control the seizures caused by their epilepsy with medications called anti-epileptic drugs or AEDs. The type and severity of the seizure will determine what and how much medication is needed. Good adherence to your medications is important to managing and controlling your epilepsy.

Surgery to correct the cause of the epilepsy may be an option to repair damages or deficiencies in the brain that causes the seizures.   Another option involves using medical devices that help to correct and control the electrical impulses in the brain. Vagus nerve stimulation is a common device used to treat seizures. The device is implanted under your skin and sends mild electrical pulses to the Vagus nerve that helps control functions of our nervous system.

Like with most illnesses and disease living a healthy lifestyle is always necessary, epilepsy is no different. Person with seizures should strive to:

The Centers for Disease Control and Prevention, Injury Prevention & Control –